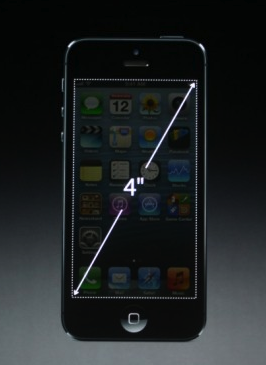 iOS6 will work on all phones and tablets back to the 3GS.

Now a brand new app: Passbook, which collects passes in one place.
Things like movie tickets, boarding passes, coupons, store cards, you get the picture. If you’ve already attended an event like a baseball game, you can take that ticket, delete it, and it shreds and goes away.

Siri now knows sports, as Scott demonstrates by bringing up the 49ers and the Packers.

Photo: panoramic pictures (done by swiping the iPhone 5 around) will be 28 megapixels-wide – that’s huge!

Photo & camera: 8 megapixel sensor, backside illumination, f/2.4 lens!
The iPhone 5 has 3 separate Microphones: one mic on the front, one on the bottom, one on the back. Important for Siri and other apps.

New A6 Processor: almost twice the speed of A5!

The iPhone 5 does LTE!

The iPad accounts for 91 percent of web traffic for all tablets. “I don’t know what these other tablets are doing!” Cook says. “They must be in warehouses or on store shelves or maybe in someone’s bottom drawer! iPads are being used everywhere by everyone.”