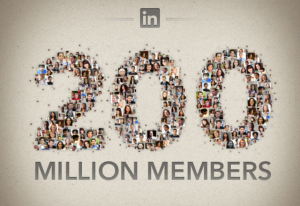 As reported by SearchEngineWatch, LinkedIn has just reached the 200 million members milestone, almost one-fifth of Facebook users and as much as Twitter.

How does a professional and job-oriented social network stack up against the current economic downturn and unemployment crisis?

Difficult to say, maybe, there’s an answer in these figures.

This is how members spread across countries:

Trailing the U.S. and its 74 million LinkedIn members are India with 18 million accounts, the UK and Brazil, each with 11 million users, and Canada with 7 million members. LinkedIn reports it is seeing the fastest growth in Turkey, Colombia, and Indonesia.