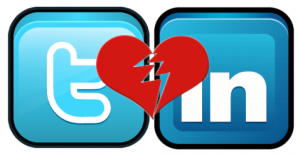 This is the kind of news that deserves much attention.

As reported by Mashable:

LinkedIn announced via a blog post on Friday that Twitter would no longer be partnering with the business-networking site to sync updates from one site to the other.
This ends a partnership that began in 2009. LinkedIn users can still create updates on the site and click a button to share to Twitter as well, but the the reverse is no longer possible.

Blame it on advertising revenues that didn’t match? Does a Twitter-filled Linkedin.profile look less professional?

Most comments in the Mashable post do agree with the parting and suggest that linking to Twitter led to much noise and lowered the professional touch required for a good-looking Linkedin profile.

Still a lot to understand about it.