Newsweek: after 80 years says farewell to paper – will be online only 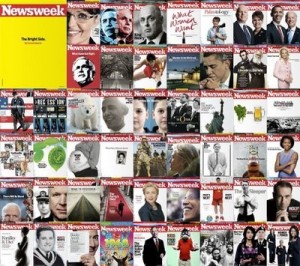 Newsweek, after 80 years, will cease publishing on paper and will survive in the online version only.

According to Bloomberg, Tina Brown, current editor-in-chief, has tried almost everything to keep it alive:

The magazine’s circulation has dropped by 42 percent to 1.5 million from 2009, according to the publisher’s statement with the Audit Bureau of Circulations.

What will be the future for current Newsweek readers (just like me?):

Newsweek expects “at least hundreds of thousands” of current print subscribers to convert to the digital edition, Baba Shetty, chief executive officer of Newsweek Daily Beast Company, said in an interview.
Brown said more and more readers are asking for Newsweek online.
“The readers have been wanting this and IAC, this whole company is geared toward digital and we really wanted to embrace our future now,” she said.

Print to PDF
This entry was posted in Advertising, Brand, Business, Business Model, Digital life, Digital media, Digital Publishing, Media, News, Online advertisement and tagged Barry Diller, IAC, Magazine, Media, News, newspaper, Newsweek, Online publishing. Bookmark the permalink.
We use cookies to ensure that we give you the best experience on our website. If you continue to use this site we will assume that you are happy with it. - Questo sito utilizza dei cookie che ci aiutano ad erogare i servizi. Continuando la navigazione l’utente accetta le nostre modalità d’uso dei cookie stessi.OkRead more