May 26th 1995: Bill Gates writes about the “Internet Tidal Wave” 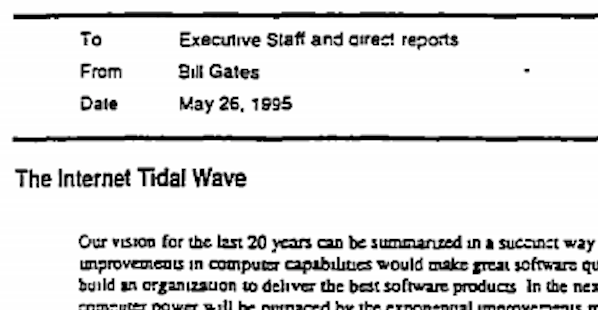 20 years have gone since this internal memo, aimed at Microsoft Executives, in which Bill Gates himself talked about the “Internet Tidal Wave” and provided a strategic point of view for a MS-dominated ‘Net; the memo surfaced during the prolonged Justice Department antitrust action against Microsoft from 1998 to 2001 and is publicly available by clicking here.

It’s so well-written and contains so much forecasting that it’s awesome to read – even 20 years later.
Gates writes about current (1995) state of the PC world, CD-ROM dominance, MSN (and its impossibile-competition against the web…), why every PC will be connected in the future.
He talks about competition in the servers arena (Windows NT vs. Unix servers), about NetPCs (which went to nowhereLand…) and Netscape (a “newborn” competitor in the browser arena).

I think this is a truly awesome piece of history, besided whatever happened later, that we all should read and think about – at least for the next 20 years 😉

[Update: a fully readable web page with the transcript of the memo is available here]

This entry was posted in Computer History, Computing history, Digital life, Digital media, html, Internet, Microsoft and tagged Bill Gates, computer history, documents, history, Internet, Microsoft, MSN, retrocomputing. Bookmark the permalink.
We use cookies to ensure that we give you the best experience on our website. If you continue to use this site we will assume that you are happy with it. - Questo sito utilizza dei cookie che ci aiutano ad erogare i servizi. Continuando la navigazione l’utente accetta le nostre modalità d’uso dei cookie stessi.OkRead more